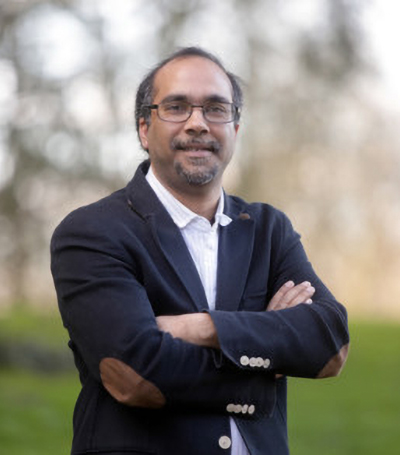 Professor Tofail A. M. Syed is an Associate Professor and the Head of the Department of Physics at UL.  His group in UL reported electrically polar nature of biological building blocks such as globular protein lysozyme, synthetic bone mineral hydroxyapatite, amino acids including superpiezoelectric beta glycine and membrane protein cytochrome oxidase C.

His research focuses on biodielectrics, surface and interfacial properties of bio/nonbio interactions, new-generation theranostics, and first principle design of novel materials and devices.  He has published over 170 peer-reviewed journal articles, presented over 70 invited and plenary lectures at international conferences/symposia, and received over 15 granted patents. His research has saved millions of $s in industrial process and product yields.

He has promoted three start-up companies, led 2 European consortia and partnered in 5 European consortia. He has led Ireland’s largest innovation partnership and largest industry Spoke with Cook Medical and collaborated with leading multinational companies such as Analog Devices International and Borg-Warner Beru Systems.

Prof. Tofail has received many awards such as University of Limerick Research Impact Award 2014, Irish Medical Device Association (IMDA) Emerging Medical Technology Award, 2013 in Medical Technology Industry Excellence Awards; The Outstanding Young Person (TOYP) Award 2012, Junior Chambers International for Limerick and Ireland; Finalist, Best Project Award 2013 in European Commission FP6 and FP7 funding within the NMP theme. Dr. Tofail is currently a member of the ADCOM of the Dielectric and Electrical Insulation Society (DEIS) of the IEEE (2020-2023) and Leader of 2 Working Groups of the European Materials Characterisation Council (EMCC), and former Chairs of European Conference of Applications of Surface and Interface Analysis (2019-2022) and International Symposium on Electrets (2017-2019).