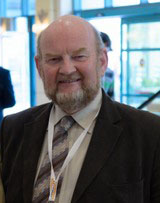 He worked throughout his career with Prof. Michael Pomeroy at Limerick and they have numerous joint publications along with other research groups internationally. Stuart was a Guest Scientist, Government Industrial Research Institute, Nagoya, Japan (1989); Visiting Professor, University of Rennes I, France (1996, 1997, 2010), University of Valenciennes, France (2010-2014), University of Karlsruhe, Germany (2007).

He is a recognised expert in Silicon Nitride Ceramics and Oxynitride Glasses and has given more than 80 invited lectures around the World. In view of this he received the Stuijts Award of the European Ceramic Society in Berlin, 2007  the International Bridge Building Award of the American Ceramic Society (Engineering Ceramics Division), 2008. He was conferred with Doctorate Honoris Causa by the University of Limoges, France, 2009. He was further honoured by the American Ceramic Society with a Symposium in his Honor (8th Intl. Symp. Adv. Processing and Manufacturing Technologies) as part of the 38th Intl. Conf. on Advanced Ceramics and Composites (ICACC), Daytona Beach, Florida (2014).

Stuart Hampshire is Professor Emeritus of Materials Science at the University of Limerick after serving as Chair of Materials Science for 17 years (1996-2012). He was Course Director and developed a new B.Sc. in Materials Science (1983-93). He was Director of the Materials Ireland Research Centre (1991-2007) working with Enterprise Ireland to support Irish industry in areas of Materials Technology. He served as Associate Vice President, Research (1999-2002) and successfully led the University’s proposals for government infrastructure funding (€16.5 million) for the establishment of the Materials and Surface Science Institute (MSSI) with a new dedicated building and state-of-the-art laboratories and equipment. MSSI further expanded and became a major part of the Bernal Institute.

He has served on Editorial/Advisory Boards of 10 peer-reviewed journals and currently acts as Associate Editor of J. Ceramics and J. Asian Ceramic Societies. He worked with Michael Pomeroy on Encyclopaedia of Materials Science: Technical Ceramics and Glasses.