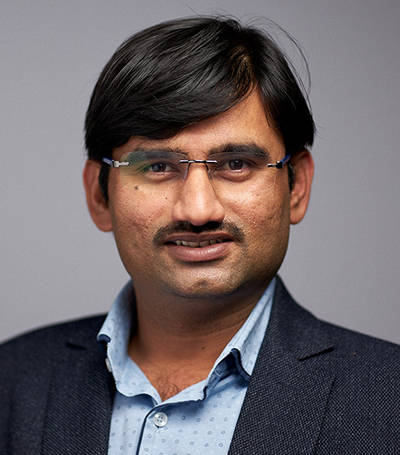 Nanasaheb Thorat is an SFI-IRC Pathway Principal Investigator at the Bernal Institute.  He was awarded three Marie Curie Fellowships and has worked as a Scientist at the University of Oxford, Medical Science Division (2020-2022).

Nanasaheb has published more than 100 international publications including 70 peer-reviewed journal research papers and articles, 7 Books, 25 book chapters.  He has presented over 20 invited and plenary lectures at scientific peer-conferences in Singapore, France, Germany, USA, Ireland, Poland, South Korea, and India, and has received international acclaim and awards for his research contribution.

He has generated in excess of 1.5 million Euros in research funding, supervised students/early researchers and actively participated in outreach and scientific dissemination for the service of the wider community.

He is a multi-awarded scientist and researcher, some of his awards include: the Japanese Society for the Promotion of Science (JSPS) Fellowship in Japan (2017), PBC-Outstanding Fellowship, Israel (2016) and also worked as Senior Research Fellow at Samsung Biomedical Research Institute, South Korea (2014-2015.)  He was the first Indian winner of the European Commission’s Innovation Radar “Grand Prix of the Innovation Radar Prize 2020.

His research group at University of Limerick are involved in designing new magnetic and light-activated nanomedicine therapy and Raman imaging techniques for breast and brain cancer of and new generation cancer vaccines.