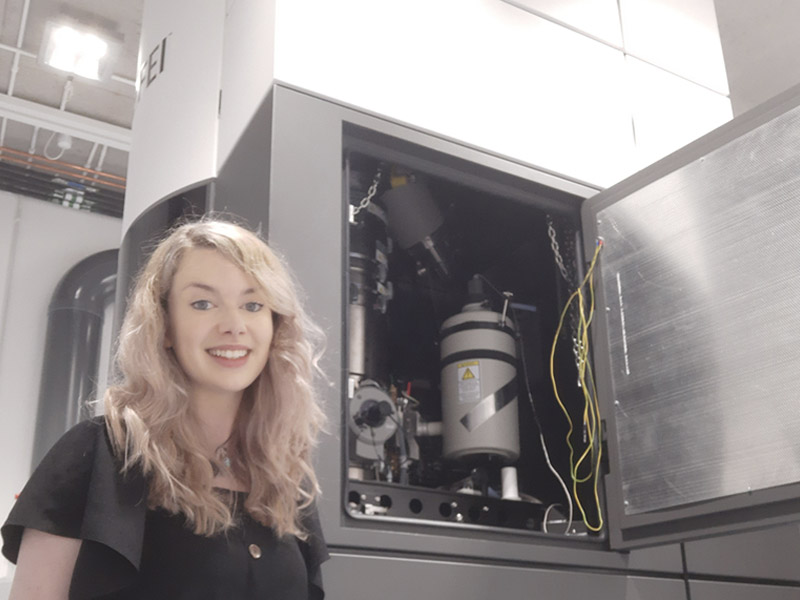 A researcher at the Bernal Institute,  University of Limerick has become the only Irish recipient of a University Research Fellowship from the Royal Society.

The Royal Society recently announced 38 successful University Research Fellowship candidates for 2020, with Dr Michele Conroy, an SFI Analog Devices Research Fellow at UL, successful in being appointed. The scheme was established to identify outstanding early career scientists who have the potential to become leaders in their chosen fields and provide them with the opportunity to build an independent research career.

Dr Conroy will receive a maximum of €512,243 direct costs (€649,915.9 including overheads) over 60 months for her project, the proposal title for which is ‘Improper Ferroelectric Domain Wall Engineering for Dynamic Electronics’.

She explained the project was “based on producing future quantum devices where the electronic circuitry can be drawn and moved similar to the etch-a sketch kids toy. Our current electronic devices are made up of fixed components of hardware. Each component has to be produced by separate processes within extremely expensive and large semiconductor fabs.”

Dr Conroy’s plan is to draw the devices into ferroelectric crystals, forming regions of conduction and insulation simply by changing the strain of the material.

“In ferroelectric materials just shifting slightly the location of atoms results in the properties of that region completely changing. If we can control that shift, the end user can design exotic new nano-devices. If we don’t like or need the device we drew anymore we can just wipe it and start again,” she explained.

Dr Conroy currently uses the electron beam in microscopes now to shift atoms controllably so she can test out what types of designs are possible all at the atomic scale. Her Royal Society project is in collaboration with Berkeley National Laboratory and Imperial College London.

Venki Ramakrishnan, the President of the Royal Society said: “The URF scheme celebrates and rewards high calibre early career scientists throughout the UK and Ireland. While Brexit and the pandemic will have an impact on early career researchers, it is gratifying to see this year’s URF scheme continuing to support talented researchers from around the world.

“This is vital for sustaining the talent pipeline that the UK’s science and innovation sector relies on. The scheme’s alumni go on to achieve great things within their disciplines, with their research contributing to the advancement of our society.”

Before joining UL, she was a staff scientist at Pacific Northwest National Laboratory in Washington state. She used in-situ heating and liquid electron microscopy to investigate phases changes at the atomic scale in metal alloys and oxides.

Dr Conroy completed her PhD at Tyndall National Institute and University College Cork. Her research was focused on thin film growth and strain engineering of materials for LED devices. She was born and raised in Toronto Canada where she says her love of microscopy was inspired during a trip the local science centre. The Royal Society grant will also fund the outreach program ‘under the microscope’ run by the Microscopy Society of Ireland inspiring the next generation of scientists.