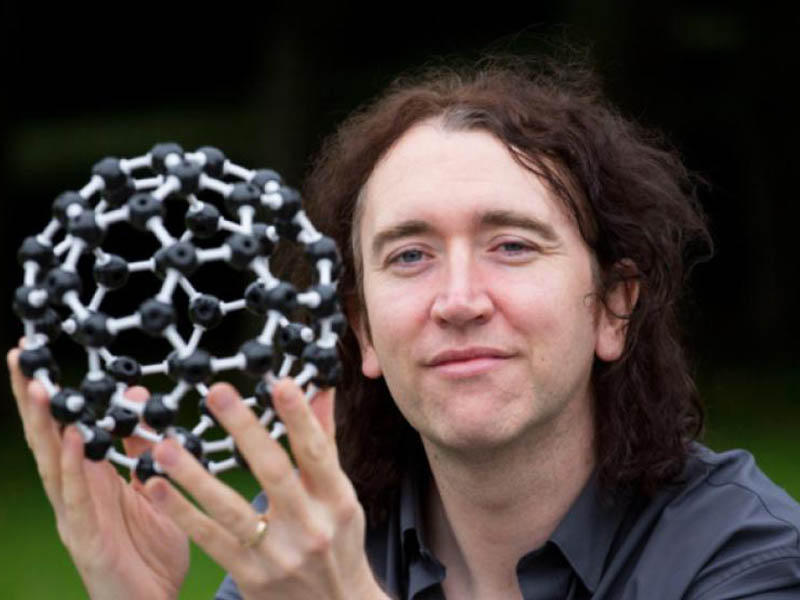 Scientists at the Bernal Institute, UL have helped discover a molecule that could have a major impact on how data is stored and processed.

The UL researchers found that a simple metal–organic molecule can go beyond simple binary (0 – OFF, 1 – ON) computing logic and can in fact switch between three distinct, long-lived states.

This first demonstration of a ternary ‘molecular traffic light’ device could provide a low-energy means of storing and processing unstructured ‘big data’ required for the Internet of Things (IoT) and Artificial Intelligence (AI).

Damien Thompson, Associate Professor in Physics at UL who leads a research team in predictive materials design at the Bernal Institute, proved, using state of the art computer simulations performed on the Irish Centre for High-End Computing supercomputer, that the surprisingly stable third state is made possible by an unequal sharing of electrons between different sides of the molecule.

The molecules were synthesised by Prof Sreebrata Goswami at the Indian Association for the Cultivation of Science (IACS) in Kolkata, and were made into films and their electrical properties measured by his son and lead experimentalist Dr Sreetosh Goswami at the lab of Prof Venky Venkatesen at National University of Singapore.

Prof Stanley Williams, founding director of the Quantum Science Research Laboratory at Hewlett-Packard and now at Texas A&M, helped develop the new device paradigm based on the discovery of the new electrical properties.

“Here, we managed to push way beyond industry roadmaps by finding a ternary resistive memory device with three states that are well-separated from each other in terms of conductance and, just as importantly, stay working away perfectly for weeks on end,” explained Professor Thompson.

“The trick to this first commercially viable multi-level computing device is a slightly arcane physical phenomenon called ‘charge disproportionation’ or symmetry breaking, which we proved using computer simulations,” he added.

Professor Luuk van der Wielen, Director of Bernal Institute at UL, said the research was “high impact and reinforces the ambition of the Bernal Institute to impact the world on the basis of top science in an increasingly international context.

“This is a continuation of Bernal scientists’ world-leading contribution to the field of predictive materials modelling,” he added.

Professor Sean Arkins, Dean of Science and Engineering at UL, said: “Researchers at UL’s Department of Physics continue to pioneer the exploitation of organic materials for electrical applications, and this work places them at the forefront of molecular nanotechnology.”

Professor Thompson outlined that scientists have long noticed that certain materials can “breathe” in an electric or magnetic field, and sometimes the electron cloud around the molecules can lose its symmetry.

“This has remained an academic curiosity until now lacking technological relevance because it has always been associated with a big change in temperature or pressure,” he said.

“Whereas here the third asymmetric state is created simply by allowing current to flow through the device and it persists over a broad temperature range (-100 to +100 °C) so it is suitable for most conventional computing as well as future applications emerging from the symbiosis between physics, computing and biology.

“In this new material, ions pulse back and forth between different binding sites on the molecules, which opens up the third state, making it energetically accessible and technologically exploitable,” he added.