Bernal Professor J.J. Leahy shares great tips on reducing your CarbonFootprint on the RTE Show What Planet Are You On? 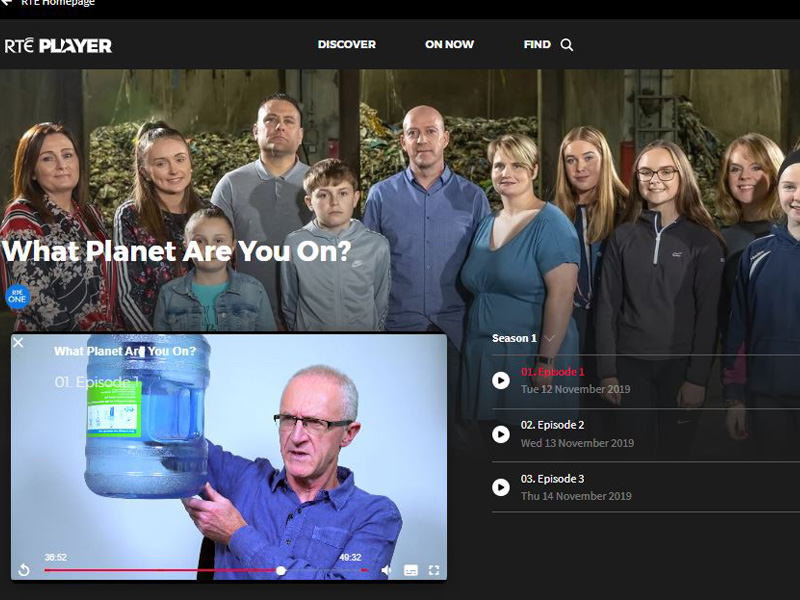 Watch the show on RTE Player

To coincide with Science Week, What Planet Are You On? a factual reality series funded by Science Foundation Ireland, follows three households tackling real challenges in the areas of water, waste, energy and food in their homes.Three households welcomed cameras into their homes: the Gannons in Tuam, County Galway, the Mc Kevitts in Mullingar, County Westmeath and the Cullens in Finglas, Dublin. Each house was retro fitted with water flow meters to measure every drop of H2O used, smart plugs and a new electricity monitoring device called a Smappee recorded every Watt consumed by the households and their bins were taken away each week to be assessed.

A team of Data Collectors monitored the three households, day and night. Each crumb of food was noted. Every calorie counted and the carbon foot print of each plate of food is revealed in each show. Every kilometre travelled was recorded, by foot, bicycle, car, train or bus. These three households had nowhere to hide.

Crunching the numbers, four Experts in their fields; Professor JJ Leahy for energy use inside and outside the home, Professor Fiona Regan for water use, Dr. Marco Springmann on diet and Dr. Brian Kelleher on waste.

Each show features a week of household monitoring, followed by a meeting with the Experts. This meeting was filmed on the Tipping Floor of the Dublin Waste To Energy Plant, which takes black bin or refuse waste and turns it into energy to power 100,000 homes. The Tipping Floor is set against a backdrop of black bin waste and the stark reality, that as a nation, if we make small changes and think beyond our bin lids, we can as a nation reduce black bin waste by up to 20%.

Three shows – one outcome, a better world for us all. What Planet Are You On?