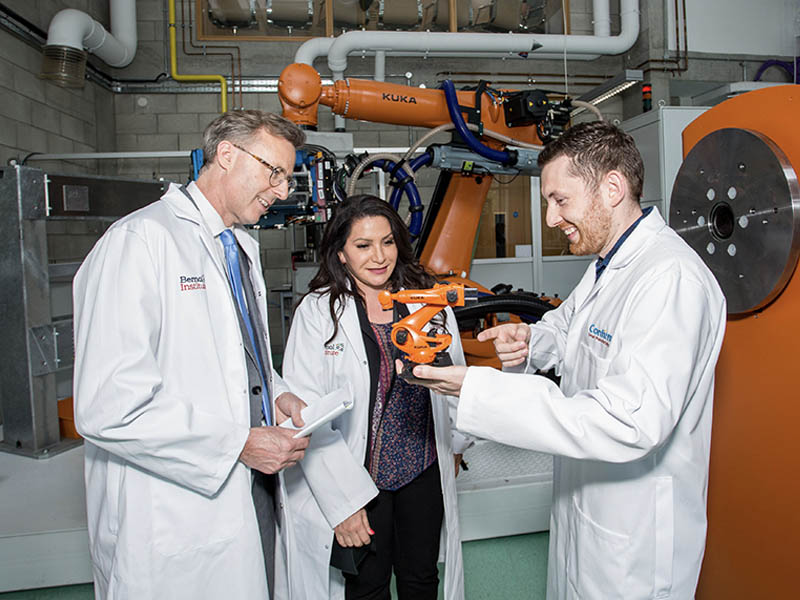 A delegation of California state legislators and industry leaders have visited University of Limerick to hear about the region’s “exceptional” economic recovery.

The group was welcomed to the Bernal Institute at UL by Minister of State Patrick O’Donovan and UL Deputy President, Chief Operating Officer and Registrar Gerry O’Brien.

Industry leaders, staff delegates and business representatives from California were also among the high powered delegation that visited UL this Thursday.

The guests were greeted by Prof Luuk van der Wielen, Bernal Institute Director and given a tour of the facility after a formal welcome by Gerry O’Brien and an overview of Project Ireland 2040 by Minister O’Donovan.

The visit was coordinated by Department of Foreign Affairs, the IDA and the O’Neill Group and the delegation came to Limerick to hear about the region’s recent economic successes, particularly in the area of research and design.

Many of the group have a background in education so investment in the sector was of particular interest, as was UL’s close collaboration with industry and its actions as a knowledge broker within competitive industries.

The delegation’s visit to Ireland includes stops in Belfast, Cork and Dublin but Limerick was a specific area of interest due to its rebounding economic, plus strong legacy connections with the US and California.

The activities that stimulate economic growth as well as UL’s SFI funded research centres were also points of highlight for the visiting delegation.

UL deputy president Gerry O’Brien told the delegation in his address that “the pipeline of graduate talent emerging from this University and the strong focus placed on R&D at postgraduate level” aid the decisions made by FDI companies to locate international centres in Limerick.

“It showed the importance of investing in education and UL continues to act as a knowledge broker with competitive industries such as the pharmaceutical industry with SSPC (Synthesis and Solid State Pharmaceutical Centre), the major pharma companies in Ireland are all involved and the model of engagement is ground-breaking within that sector.

“All of this has aided in the recovery of Limerick and the region as big industries saw evidence of the early successes. Employment figures rose as the quality and caliber of jobs began attracting more people to the region. Domestic companies were thriving again – this was Limerick’s success story,” he added.

Speaking to the delegation from California on the Irish emigration of the past, Minister Patrick O’Donovan said that the measures now in place to aid economic recovery will mean that less people will be forced to leave the country in search of work.

He said that Government was heavily investing at the moment as it seeks, “collaboration, partnership and relationships” and invited any company “that is looking for a place to step off in to the European Union, then this is the only place to do business”.

The delegation also heard of the existing connections between UL, Limerick and California and the Department of Foreign Affairs in the region including the Sister Cities Agreement that was signed between Limerick City and County Council and Santa Clara City Council in San Jose.

Robert O’Driscoll, Consul General of Ireland to Western USA, said there was a “very strong relationship” between Limerick and California, noting that a Sister Cities Agreement was signed between Limerick City and County Council and Santa Clara City Council in San Jose in 2014